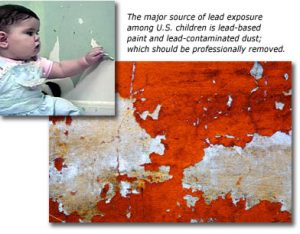 The use of lead in paint was banned in the United States in 1978, although the dangers of lead-based paint were known much earlier and it was banned in other countries as early as the early 1900s. While adults exposed to lead paint dust can become very ill, the greatest harm occurs in children under the age of five, who in addition to becoming ill, can suffer brain damage, learning disabilities, loss of IQ, hearing loss, neurological problems, organ failure and even death. Pregnant women exposed to lead paint can transfer the lead to the developing fetus. Chipping and peeling paint is the leading cause of lead poisoning in children.

Call David A. Kapelman, P.C. for a FREE CONSULTATION. You will not be charged any attorneys fees unless we recover damages for you. Expenses may be payable at the conclusion of your case. Hablamos Espanol.